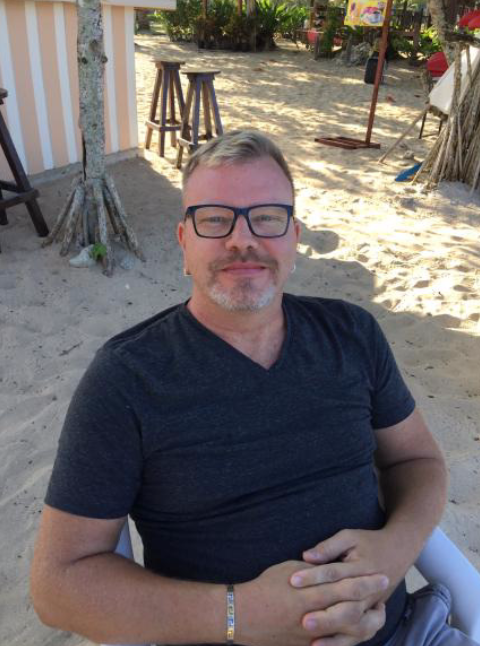 Stefan got interested in travelling after touring a year in the United States as a member of the international show group Up With People during the eighties. He did this while on a break from his training as a nurse. He then entered the travel industry as a program host and tour leader for the charter company Ving in Greece and Spain.Stefan returned back to Sweden and settled down in Stockholm where he started to work with foreign groups and individual tourists who wanted to visit Scandinavia.

The production side of the department became the center of his interest for the next nine years, including pricing of tours, procurement and suppliers agreements and designing travel brochures. His employment then took him to American Express, joining them as a marketing co-ordinator for some years.

“To help people have a wonderful stay on Lanta is just great!” says Stefan Lebert, CEO and owner of Lanta Hideaways.

The idea to move to Koh Lanta started the year 1999 since the lifestyle felt more interesting over there. The Buddhism and the way of living felt supporting. The co-operation with the owner of Southern Lanta Resort on Klong Dao Beach grew and a website was created to help people book accommodations on Lanta, which was then a fairly new destination for many back then. E-mails were sent weekly from a satellite telephone in Lanta Old Town before the Internet and mobile antennas were installed on the island! Group- and health tours, as well as hundreds of wedding arrangements each season took up most of the time during the first years.

Stefan started the first Swedish school in Thailand – Lanta Sanuk School – together with his colleague in the Southern area. Shortly afterwards, Stefan sat with the architect and the landowner sketching out the first residential area on Lanta that was sold out within less than a year. The combination of a Swedish school and a privately owned villa on Southern was a lucky one for the investors! More teachers were employed, as well as a principal/head teacher handling the Swedish curriculum, and the business was transferred to a subsidiary shortly after that to free some space.

Stefan then started a Rental Management company as the island’s first attempt to help all the new and happy homeowners on site who could not be present all year long. This grew as fast as any other business, and that company was therefore taken over by new owners who renamed the operations to ”Lanta Hideaways”.

Now, after thirteen years, he is back as the owner of the company he once started, together with a truly competent and energetic team that are doing their utmost to serve the villa and apartment owners in the common vision – to have satisfied guests in all these nice units. Every day. All year around. Lanta Hideaways Team wish you a warm welcome to our lovely paradise Koh Lanta!